Yesterday afternoon as I ran by Martyr's Square, preparations were already underway for today's supposed “million-man march” which Saad Hariri called for last month to protest against the Resistance. I thought it was strange that seats were being laid out in the central square because this seemed like a poor use of space. Far fewer people can assemble within such an arrangement. Perhaps this is simply the way such demonstrations are always arranged in Beirut. But then again, I had been asking around for estimates of the number of people expected at today's demonstrations and predictions ranged from one half a million (from a devoted 14 March supporter) to maybe fifteen thousand (from a devoted 8 March supporter). And despite hearing many rumors that Hariri was providing buses and paying money to the poorer residents of Tripoli to come down to demonstrate, I could not help wondering whether or not his people were nervous about the turnout so were organizing the logistics accordingly.

All around the square they were also setting up an enormous sound system. As I passed by the area on my way back home they suddenly decided to test the speakers by playing the most obnoxious Eurotrash music imaginable. Seriously this choice of music was an offense to the setting sun. Especially in a country so rich in musical tradition. The base was loud enough that I could feel my insides vibrate. Again I could not help but wonder why they would choose to play foreign music at a supposedly national event that was culturally so far removed from most Lebanese. Sometimes I think both sides of the conflict are only too eager to push each other to an even further extreme, making reconciliation a more distant prospect for all. 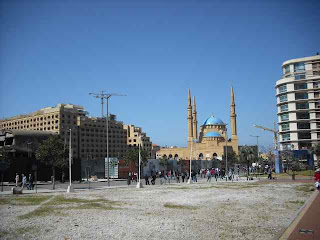 Today's demonstration started very early this morning. My neighborhood—a mixed community just south of Martyr's Square—was relatively quiet when I awoke. The normal screeches from building construction were silent. Most shops were closed and there were very few cars in the roads. Some young children were out and about playing. But otherwise the streets were bare. I headed out around noon, realizing too late that I was possibly missing the zenith of the protest. On my way I stopped to buy a fresh manoush and saw some men pointing up into the air. I looked upwards and there were hundreds of balloons ascending into the sky. I decided to rush down to the square before it was too late. 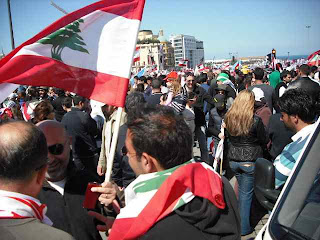 When I arrived there were still people making speeches however some demonstrators were already heading back home. The atmosphere was oddly somber. Although children wearing Lebanese flags brightened the mood the gathering seemed almost reserved. Not festive, not hopeful and not even open. People were mostly walking in small clusters without communicating much to passersby. I had seen documentation of the original 14 March demonstrations which were youthful and exuberant. Whereas this gathering seemed sterile to me. And the numbers of demonstrators were indeed quite low. Both Reuters and Agence France Presse reported that tens of thousands came out, a far cry from Hariri's goal of one million. 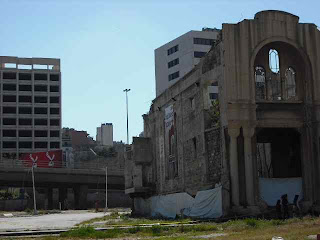 So what happened? Why did most Lebanese not come out to demonstrate? Over the past few weeks Hariri had campaigned quite heavily to encourage people to come out into the streets today. This included purchasing a barrage of billboards all over Beirut to tell the country "لا" or "no" to the Resistance. Perhaps this campaign backfired and Lebanese instead decided to say no to a political system where a privileged elite has long controlled the government and the economy. Where public services are nonexistent. And where ordinary people often have to work two full time jobs in order to make a living wage. The original 14 March protest was a movement that emerged not to support Saad Hariri but to support all Lebanese. But apparently he and his government never listened. We can only hope that the new government is listening now. 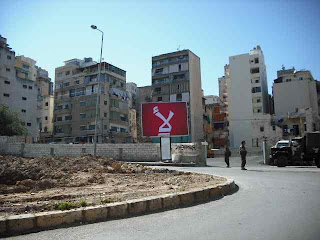 Posted by Sarah Marusek at 6:34 PM

Email ThisBlogThis!Share to TwitterShare to FacebookShare to Pinterest
Labels: Lebanon