March against Sectarianism in Beirut

One evening last week, I was sitting alone on the number four bus in Hamra waiting for it to fill up so that we could depart south. A young man came onto the bus to hand the driver a stack of flyers, which he then diligently handed out to every subsequent passenger who boarded. Impressed by this grassroots marketing campaign, I also took a flyer and translated the text the next day with my Arabic teacher. The flyer was to promote the march against sectarianism in Beirut today. But its appeal was far wider, taking a stand against corruption, injustice and the enormous public debt that the Hariri post-war reconstruction era plunged the country into. It seems beyond belief that a land of only four million people can have a public debt of around $50 billion. 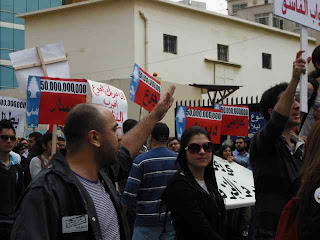 Since 1943, Lebanon’s government has been structured as a confessional system, where public offices are formally allocated along sectarian lines favoring Maronite Christians and Sunni Muslims over Shi’i Muslims. The logic of sectarianism spread from the political system to the economic system and was only marginally altered with the end of the civil international war. I had heard some people remark that similar anti-sectarian marches had already happened in recent weeks and a few days ago the Daily Star reported that the Amal party had announced that it was now informally supporting the demonstration. Some in the movement have even set up a facebook page for supporters in Dahiyeh, the southern suburb of Beirut that is home to mainly Shi'is and two Palestinian refugee camps. So today I was curious to check the demonstration out. And so too were numerous reporters, perched on the sides of the road and atop buildings. I even saw a couple of young men from Al Manar television walking around conducting interviews with protesters. 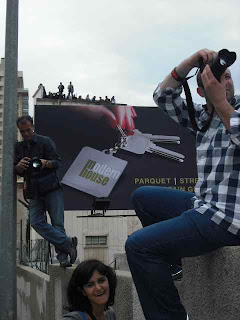 While nowhere nearly as many people came out this afternoon as did last week to commemorate the 14 March anniversary, the atmosphere was far more overwhelming. People were friendly, even jubilant, and the energy was infectious—almost like a carnival. I could not help smiling myself. As I was taking pictures from the sidelines, I suddenly bumped into a Lebanese friend of one of my friends here in Beirut. Her face was beaming as she prepared to join the march. When I mentioned the protest last weekend she exclaimed “But this is real. This is the people. Last week was nothing. They are so bourgeois!” While I completely agreed, I also thought the sentiment was rather funny coming from a woman who entertains the French Ambassador at parties in her gorgeous apartment in Hazmieh. But then again today in this environment she appeared anything but bourgeois. She seemed all too real, and very beautiful. 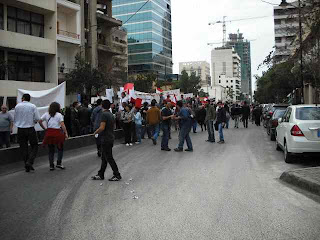 The demonstration started in Sassine Sqaure at noon and headed towards downtown. Young and old marched to Lebanese music and people were repeating the now popular Arabic chant “الشعب يريد اسقاط النظام” which translates as “the people want the fall of the regime”. Only these Lebanese protesters also added the qualifying “النظام الطائفي” or “sectarian regime” in the signs that they were carrying, while also chanting “ثروه” or revolution. Many signs protested against the massive public debt mentioned above. One sign in English said “Sectarianism kills workers”. A number of protesters were wearing Palestinian kaffiyehs and one woman held a sign that said “All Lebanese deserve labor rights”. As I left the march today, I felt very hopeful for the future of this small but important country.
Posted by Sarah Marusek at 7:22 PM

Email ThisBlogThis!Share to TwitterShare to FacebookShare to Pinterest
Labels: Lebanon