In Solidarity with Imam al-Sadr

Since Libya's revolution began, interest has intensified among many Lebanese concerning the current status of Imam Musa al-Sadr, the charismatic cleric who disappeared during a visit to Libya in 1978 and whose legacy remains a powerful force among many Shi'is in Lebanon. Indeed, his continued importance was illustrated in yesterday's demonstration outside of the United Nations in Beirut. Lebanese parliamentarians Ali Khreiss and Emile Rahmeh joined hundreds of protesters in a show of solidarity with the Libyan opposition and to demand justice for Imam al-Sadr, whose fate is still unconfirmed. Is al-Sadr alive and currently imprisoned in Libya as some members of his family hope? Or was he murdered in 1978 and buried in Sabha, a city 400 miles south of the Libyan capital Tripoli? 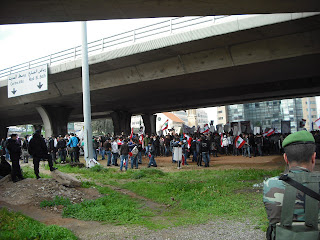 During the 1960s Imam al-Sadr launched extensive social institutions to empower the Shi’is of Lebanon, a population that was socially, economically, and politically marginalized throughout much of the twentieth century. These institutions continue to deliver important services today. In 1962 he founded the Imam al-Sadr Foundation that works mainly with women and children in South Lebanon. In 1969 al-Sadr established the Supreme Islamic Shi’i Council, the first political institution to represent Shi’i populations in Lebanon. He also launched a resistance party to retaliate against Israeli incursions into Lebanon, which eventually developed into the sectarian militia known as the Amal movement, an anagram in Arabic that means ‘hope’. After the long civil-international war in Lebanon the Amal movement transformed into a political party that remains popular today. The green flag of Amal is proudly displayed throughout many neighborhoods in central and southern Beirut as well as in southern Lebanon. 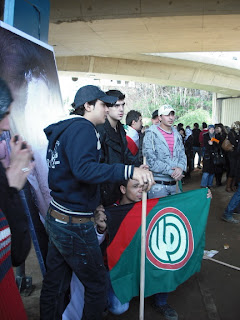 Many scholars credit Imam Musa al-Sadr for his ability to mobilize Shi’is and call for a more participatory and representative politics in Lebanon. Similar to his Shi’i contemporaries in Iran and Iraq, al-Sadr rearticulated Marxist ideas within a religious framework that strongly resonated with many Shi’is in Lebanon. For example al-Sadr reworked the tragic story of the Battle of Karbala to stress the importance of Hussein’s courage and his choice to take political action. He also refashioned the story of the Twelve Imams to be one of inspiration rather than imitation. Although Imam al-Sadr's language resonated mostly with the Shi’is of Lebanon, his framework included the disinherited and deprived worldwide. He also made frequent and bold overtures to Christian leaders in Lebanon. I have been told on several occasions how al-Sadr himself once led a congregation after prayer to a Christian ice cream vendor who was being boycotted by Muslims. Before anybody in the congregation realized what was happening, al-Sadr ordered an ice cream. In the end his followers did the same. During yesterday's demonstrations several of the speakers pointed out that Imam al-Sadr represents the best of both the Muslim and Christian faiths, stressing that Lebanon was one nation and one people. 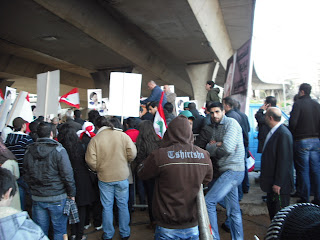 Hundreds of students carrying Lebanese flags and pictures of Imam al-Sadr took part in yesterday's demonstration. The atmosphere was spirited as the crowd expressed frustration with the Libyan leader Colonel Qaddafi. I saw one student walk over to several demonstrators and unroll a poster of Qaddafi, inviting young women to stand on his face or spit at his image. Other students burned his effigy. But perhaps the most powerful expression of anger emerged when a young man took to the podium dressed as the eccentric Libyan leader with a follower holding an umbrella over his head, mocking the Colonel's first television address following the fall of Benghazi. 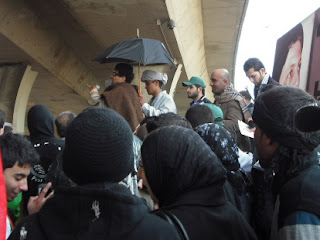 When the Qaddafi impersonator started speaking, the crowd booed and hissed with excitement. I was standing next to an elderly women who gleefully chuckled as demonstrators behind us started throwing small objects at the Colonel. Almost immediately a barrage of liquid, cans, carrots and other vegetables was being thrown at the podium. Inundated by produce, Qaddafi was forced to step down and the demonstration was over. If only his counterpart in Libya would also exit the stage so promptly.
Posted by Sarah Marusek at 3:13 PM