Today Muslims commemorated Ashura throughout Lebanon. Ashura refers to the tenth day of the Islamic calendar and recalls a historical episode not long after the death of the Prophet Mohammad. After the Prophet's cousin and son-in-law Imam Ali was assassinated, there were disagreements in the Muslim community about rightful succession. Some believed the rule should be passed on to the Prophet's descendants, while others preferred a consensus candidate chosen by the learned community. The Shi’is, which in its original Arabic form shi’tu ‘ali means the followers of Ali, turned to Ali's sons Hasan and Hussein for leadership, while the Sunnis looked to the Umayyad Caliphate in Damascus. Although Hasan attempted to mediate this disagreement by signing a treaty, he was ultimately poisoned. 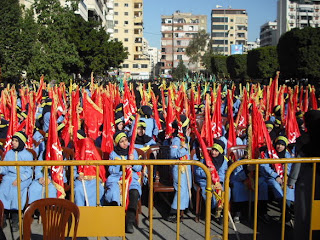 In an act of resistance, Imam Hussein died in the Battle of Karbala in the year 61 AH / 680 CE when he and 72 of his Shi’i followers were killed by reportedly tens of thousands of Sunni Umayyad soldiers. As the story goes, for six days Hussein and his small army resisted the enemy. However when the Ummayyad soldiers blocked off the water supply, his army slowly started to perish. Nevertheless, rather than die in retreat, on the tenth day of the battle Hussein and his remaining forces charged the attacking army, leading them all to a dignified death. This amazing story of the Prophet’s grandson, who bravely committed to battle against all the odds, has become essential to contemporary Shi’i narratives. By historicizing this story, Imam Hussein and the Battle of Karbala inspire resistance against all forms of present day injustices, be they social, economic, political or military. 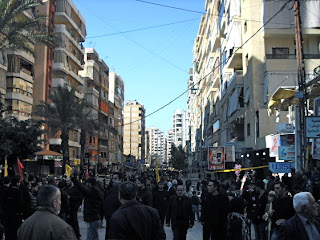 This morning tens of thousands of Lebanese Shi'is, as well as Sunni and Christian supporters of the resistance, assembled in southern Beirut for a procession and a poetic recitation of the Battle of Karbala. By remembering the martyrdom of Hussein, Shi'is have time to reflect on the meaning of sacrifice in the ongoing struggle against injustice, tyranny, and oppression. Following the religious rituals Sayyed Hassan Nasrallah, Hizbullah's Secretary General, was due to make a speech via satellite. Since the July 2006 war with Israel, Nasrallah rarely appears in public because of fears for his safety. But in a modern day act of resistance, Nasrallah joined the Ashura commemorations today in person. The crowd was ecstatic. Passion, loyalty and confidence swept young and old, women and men, all to their feet. 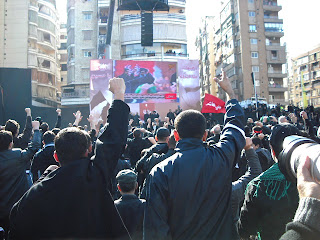 While he only spoke in person for a few minutes, Nasrallah's courage to appear at all is remarkable. Considering the current political situation in the Middle East—what with the increasing threats against Iran including targeted assassinations of Iranian scientists and the destruction of Iranian nuclear facilities, the espionage planes and networks being discovered and quashed, the domestic and international pressures related to the divisive Special Tribunal for Lebanon, and the regional betrayal of Syria—Nasrallah's appearance today is a powerful statement to Hizbullah's enemies. His presence communicated that the resistance is strong, dedicated and defiant. That the people and party are one. Let us just hope that the hawks in Tel Aviv and Washington are reflective enough to listen. 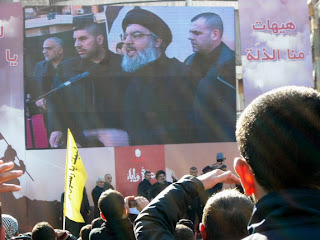 Posted by Sarah Marusek at 4:56 PM